I realized this morning that I have been reading these comics for years.   YEARS!  Every weekday morning for at least four years. 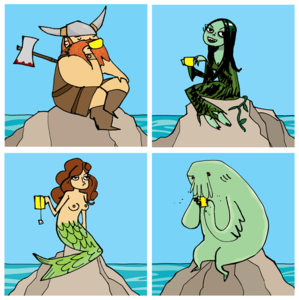 I’ve never thought about it, but after four years of reading something nearly every day, it probably makes a pretty big impact on your thought patterns, aesthetic sense, or at least sense of humor.

This morning, my husband (!) sent me a link to John Allison (illustrator showcased above, mastermind behind scarygoround [yet another clever instance of wordplay on the internet])’s blog – more specifically, this hilarious satire of the current music scene climate.  Usually Howard + I read QC together on the train in to work (train internet = the most satisfying internet), and then he tunes out while I read about tweens investigating monsters, so he had no idea about the connection.  But something about this sense of humor was familiar and comforting to me; not only was it funny, it was … welcoming, somehow.  Sure enough, once I became self-aware enough to scroll to the top of the page, I realized I had been enjoying it for years, and was a big enough idiot to only just be discovering that it was so much more than I imagined!